The Government of the Northwest Territories (GNWT) recognizes the importance of seal to Inuit and Indigenous peoples. Since time immemorial, seal has provided food, warm clothing and oil for their very survival. These cultures have immense respect for seal and waste nothing. This subsistence harvest is primarily for food and oil. Crafters make full use of the seal pelt by creating beautiful, warm seal products for their family and the world to enjoy.

A seal product carrying a GNWT Seal Certification tag and accompanied by a Certificate of Authentication, shall be deemed to comply with Regulation (EC) No 1007/2009, which allows for the export/import of seal products that result from hunts conducted by Inuit and other Indigenous communities in the NWT. It also allows for the import of goods for the personal use of travellers and their families.

Certification Tag Front and Back            Certificate of Authentication 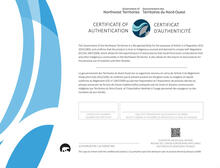 In 2009, the EU introduced the EU seal regime with Regulation (EC) No 1007/2009 (the Basic Regulation), which introduced a general ban on the placing of seal products on the EU market.

On October 13, 2015, the Basic Regulation was amended by Regulation (EU) 2015/1775 in order to reflect the outcomes of World Trade Organization (WTO) rulings in the EC Seal Products Case. This exception to the general ban was introduced to acknowledge the important role that the seal hunt has for the socio-economy, nutrition, culture and identity of the Inuit and other Indigenous communities, where seal contributes to subsistence and development, provides food and income to support the life and sustainable livelihood of the community, as well as preserves and continues the traditional existence of the community.

As a result, the current EU seal regime provides for two exceptions to the ban, which allows seal products that come from hunts conducted by Inuit or other Indigenous communities to be:

Seal products entering the EU in accordance of these exceptions shall be accompanied by a document attesting compliance with the conditions set out in the "Inuit or other Indigenous communities exception", issued by a body recognized for that purpose. On February 14, 2017, in accordance with Article 3 of  Regulation (EU) 2015/1850, the European Commission granted recognized body status to the GNWT enabling them to issue documentation to accompany seal products for placement on the EU market.

More information on the trade in seal products can be found on the European Commission website.