Joe Jaw Ashoona was born March 09, 1988 on Baffin Island, today he makes his home in Yellowknife, the Capital of the Northwest Territories. He is a 4th generation Canadian Inuit artist and part of the Ashoona family of Cape Dorset, one of Canada’s most successful Inuit art families.

Joe works along side his parents Goota Ashoona and Bob Kussy, and his cousin Koomuatuk Curly in the Ashoona family studio in Yellowknife’s down town area, creating works in soapstone and whalebone.

Joe’s early childhood saw him travelling to Inuit art exhibitions across North American continent with his parents and grand parents, and it is the family’s strong artistic tradition that has influenced and inspired him to choose Inuit art as a career.

While still in school… Joe and his brother represented the NWT at the National Schools History Fair, attended the National Aboriginal Achievement Awards, travelled the largest annual sculpture show in North America, visited Canadian museum backrooms, starred in a reality TV show on the life channel… and took up carving seriously.

As a contemporary urban Inuit artist Joe’s carving style is his own, and the subject matter for his sculptures focuses upon Inuit shamanic subjects and stories, snowy owls, and polar bears. Inspiration for some work is based on the notable works of his great grandmother –Pitseolak Ashoona and his grandparents; Kiawak and Sorroseeleetu Ashoona, and his family’s significant contributions to Canadian and Inuit cultural identity over the course of the last half century.

His family has during the life of modern Eskimo and Inuit art received Orders of Canada, National Aboriginal Achievement Awards, memberships in the royal Canadian Academy, been featured on three issues of Canadian postage stamps, and been the focus or featured in numerous Inuit cultural and art documentary films. There are few cultural institutions on the planet that possess Inuit art collections that do not possess works by Ashoona family members that Joe acknowledges as having laid the foundation for his career as a contemporary urban Inuit artist. Joe’s growth as a young Canadian artist has benefited tremendously from having access to fully equipped studio and mature carvers who have for the last half decade provided him instruction, tools , carving materials, and commercial instruction.

Joe Jaw Ashoona’s art work is featured at a number of local Yellowknife Art galleries and in private and corporate collections across Canada. Joe has participated in many Yellowknife arts exhibitions, National Aboriginal Day celebrations, and Joe showcased his Inuit art pieces at the Pemberton B.C. Winterfest in 2008 at the Lil”watul cultural center.
At present Joe is working towards furthering his career as a fourth generation Inuit artist. Working as an urban Inuit artist has strengthened and provided diversity and opportunities that have set Joe apart from his counterparts in the communities. He is a full partner in a completely equipped modern carving studio with a showroom that sees over 1200 visitors each year. Many national and international celebrities, leaders of state, and public figures have visited and spent time with Joe at the family studio, and have by most accounts and comments truly enjoyed the opportunity to spend time with an interesting northern artist.
In early 2009 Joe received a carving production grant from the Canada Arts Council grant under the aboriginal programming initiatives, and was featured in a major article in the Canadian arts magazine-“Galleries West” and the Canadian governmental tourism magazine –“Pure Canada”.
In the spring of 2009 he will be installing some of his work in the Edmonton international airport, and in the early summer will travel to Haida Gwaii as a guest of the Haida Council of Nations to be part of a cultural-arts exchange program, which will see him working with acclaimed Haida artists,and exhibiting some of his work in the new Haida museum and cultural center.. Joe hopes to participate at the 2010 Winter Olympics as a member of the Canadian Cultural Events programs. Joe’s work has found home across Canada and internationally and he is to be found most days working out of the Ashoona family studios in the heart of downtown Yellowknife. 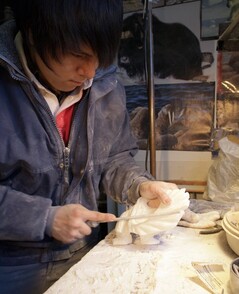 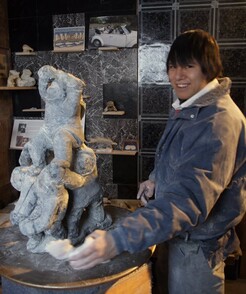 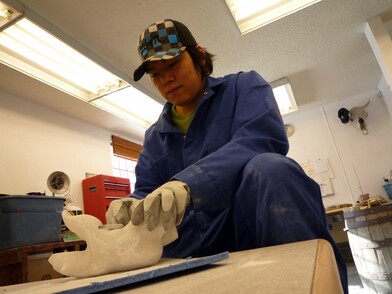 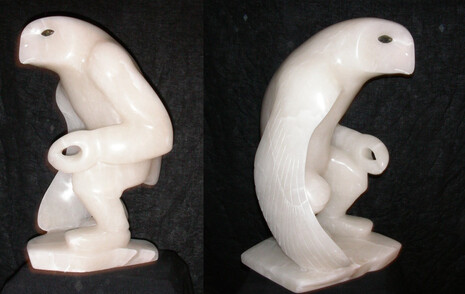 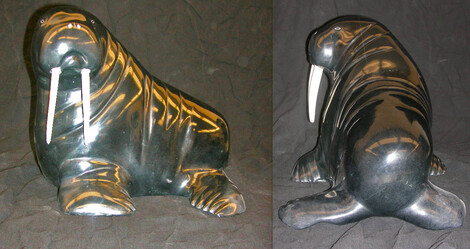