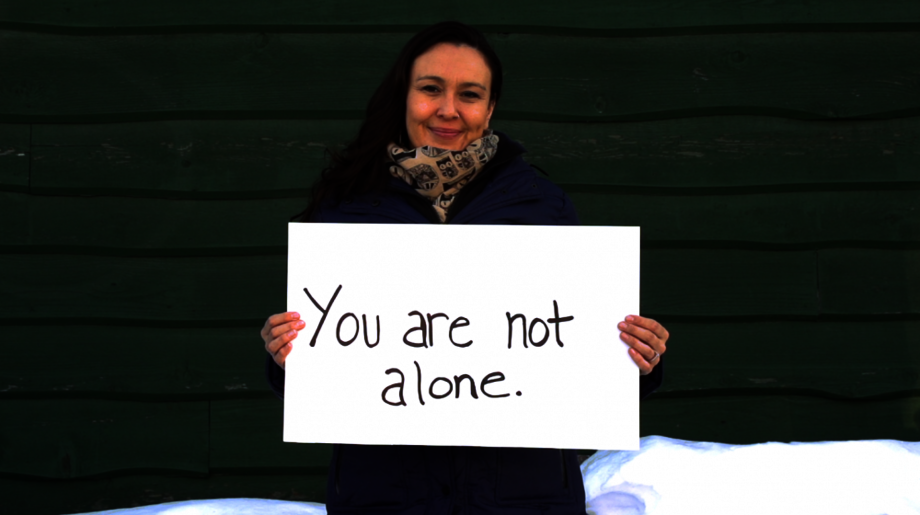 "You're Not Alone" WINS PLATINUM AWARD IN THE 2015 MARCOM AWARDS; aRTLeSS Collective Tops the Shortlist for International Awards Honouring Best of Marketing and Communications Industry.

aRTLeSS Collective announced on November 12th, 2015 that it has won top awards for "You're Not Alone", a music video PSA (Public Service Announcement) made in partnership with the GNWT's Department of Health & Social Services, in the annual MARCOM Awards.  With over 6,500 entries from around the world, The MARCOM Awards, presented by the Association of Marketing and Communication Professionals (AMCP), is the leading international award honouring excellence in Marketing and Communications. AMCP, which juries and selects The MARCOM Award Winners, is comprised of industry experts who look for companies and individuals whose talent exceeds a high standard of excellence and whose work serves as a benchmark for the industry.

ABOUT You're Not Alone

“You're Not Alone" was a collaborative project with many of the NWT's greatest musicians, including dozens of supporting cast from the near and far North, to acknowledge and reduce shame and stigma around mental health issues. The video includes images of several prominent NWT residents, including Yellowknife Mayor Mark Heyck and Commissioner George Tuccaro, holding signs with messages like, "You are not broken" and another that notes "7 million Canadians live with a mental illness".

The “You’re Not Alone” music video was created for the GNWT's Department of Health and Social Services. The song is an original piece and sets a tone of togetherness and support as northerners are featured holding positive messaging related to mental health and community support. “You’re not Alone” evokes a sense of hope, optimism and compassion. The visual serves as a unique reminder that – like in the true spirit of the north – we are all in this together. As the song lyrics present to us; “You are not alone, open your door, this is your home”.

Mental Health Awareness matters to us!

"I'd love to thank each of the artists that took part in this epic project - it meant a lot to each one of us, to be able to reach out beyond our own networks to spread this simple but powerful message. We are not alone- we are a part of a family of humanity, we are not problems, we are people. This video was a chance for us to recognize personally that mental illness is not shameful, happens to many of us, and that by reaching out to friends and family we can make a difference in all of our lives.”

" I'm really proud of our little company and of aRTLeSS Collective's humble contribution to this project, but what makes me more happy than the credit is watching the video again and remembering how much community support we had for this initiative. Everyone we spoke to, from the Minister of Health to the entire Yellowknife Fire Department, jumped on board immediately to participate. Walls came down and red tape evaporated when folks learned about the subject matter. It doesn't hurt that the song is like ear candy, and people want to listen to it over and over again. To date, online viewers have watched our music video nearly 15,000 times between aRTLeSS Collective's Vimeo site and the GNWT's own HSSCommunications Youtube channel, and the song has played countless times on local radio stations. This award is positive affirmation that we need to continue conversations around mental health and suicide prevention, to "break the silence" and taboo historically associated with these topics. "

aRTLeSS Collective is a Yellowknife based media-production studio. Founded by producers & creative directors Jay Bulckaert and Pablo Saravanja, the aRTLeSS Collective works with Northern Canada's top talent and professional film, television and media-artists from around the circumpolar world.