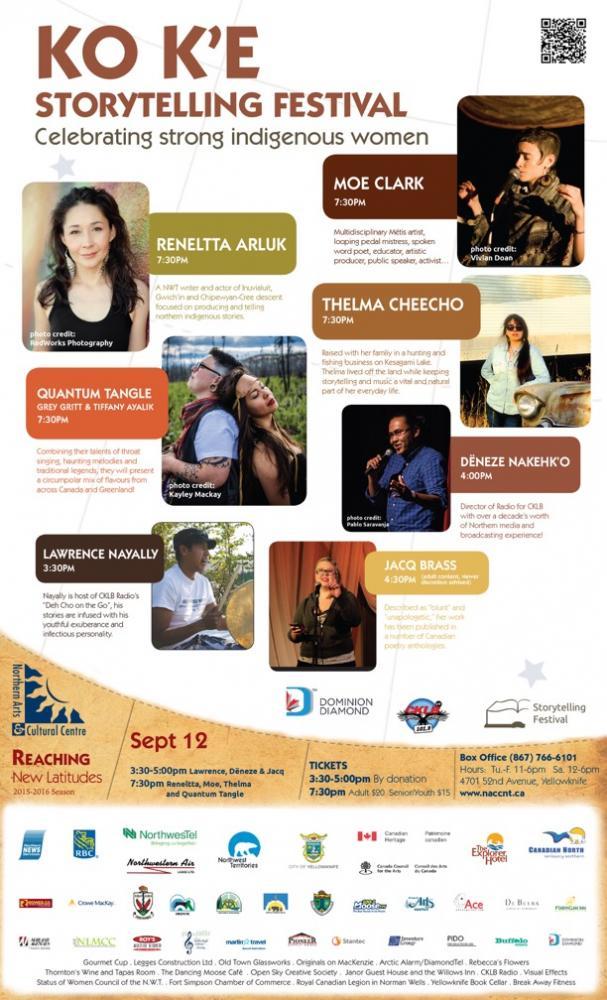 The Ko K'e Storytelling Festival this year celebrates strong indigenous women, each presenter sharing through their own creative discipline, be it storytelling, playing music, telling legends, reciting poetry or even throat singing. Featuring visiting artists who span international borders to established local artists who are growing national reputations. Starting at 3:30pm on Saturday the 12th of September and showcasing eight artists with acts that are focused on the powerful and influential women from this land and from far off places, sharing the stories that connect us all!

Dëneze Nakehk’o (YK 3:30pm) is Denesuline and Dehcho Dene from Denendeh. He has over a decade’s worth of Northern media and broadcasting experience, a continuation of his family’s storytelling tradition. Nakehk’o is the Director of Radio for CKLB, part of the Native Communications Society of the Northwest Territories.

Jacq Brass (YK 3:30pm) includes themes of love, activism, change and identity throughout her poetry. Described as “blunt” and “unapologetic,” her work has been published in a number of Canadian poetry anthologies. She currently lives in Yellowknife, where she has been performing spoken word since 2011.

Lawrence Nayally (YK 3:30pm) was raised in Fort Wrigley by his grandparents, and grew up inspired by the wisdom of his elders. Nayally is Host of CKLB Radio’s Deh Cho on the Go, his stories are infused with his youthful exuberance and infectious personality.

Reneltta Arluk (YK 7:30pm) is of Inuvialuit and Dene descent and is originally from Fort Smith, NWT. Raised by her grandparents on the trapline in a nomadic environment, Arluk holds a BFA in Acting from the University of Alberta and founded Akpik Theatre, a professional Indigenous Theatre company in the NWT.

Thelma Cheechoo (YK 7:30pm) is a storyteller from Moose Factory Island, Ontario, located on the southern tip of James Bay. Her family, who owned a hunting and fishing business on Kesagami Lake, lived off the land while keeping storytelling and music a vital and natural part of everyday life.

Yellowknife shows are approximately 90-mins in length, with a 15-min intermission.

There will also be performances in several other communitities:

For more information and tickets