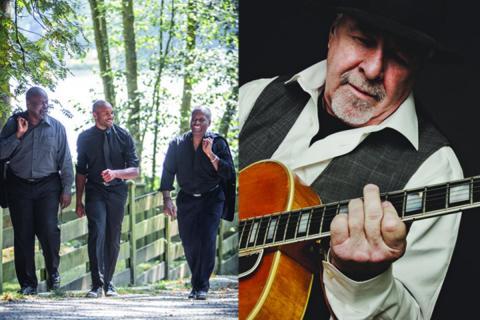 Sept 10: Jim Byrnes and the Sojourners in the Northern Arts and Cultural Centre YellowknifYellowknife.

Sept 12:The Sojourners in the St Joseph's Cathedral, Fort Smith

Sept 13: The Sojourners in the Our Lady of Victory Catholic Church, Inuvik

The long list of awards and successes Jim Byrnes has under his is a testament to his love for the blues. The singer-songwriter was born in St. Louis, Missouri where he spent much of his time going to music clubs, where the likes of Tina and Ike Turner had performed.

By age 13, Jim was singing and playing blues guitar and had his first professional gig in 1964. Byrnes moved to Vancouver in the mid-1970s after years of drifting, working odd jobs and playing music. But then in 1981 he put together a band that became a staple of the local music scene and within five years, had played about 300 shows.

Outside of his music career, Byrnes had developed a career as an actor, with roles in two CBS television shows including the crime drama Wiseguy in the late 1980s and the Highlander series in the mid-90s. He also put on his own national variety show The Jim Byrnes Show.

When Canadian blues icon Jim Byrnes called on gospel singer Marcus Mosely a few years ago to record some back- up vocals for a new album, no one could have guessed what happened next.

From the moment Mosely and his pals, Will Sanders and Khari McClelland, stepped up to the microphone and began singing, the trio realized they had something special. When Byrnes dubbed the trio The Sojourners, the name stuck and – as they say – the rest is history.

Formative years spent singing in the churches of Mosely, Sanders and McClelland, give The Sojourners’ sound an authentic edge that only comes with experience. This is real gospel - blessed with a soul that can’t be faked.