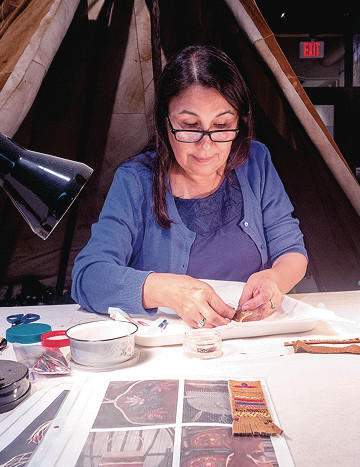 SOMBA K'E/YELLOWKNIFE
Porcupine quillwork may be fading in popularity as an art form in the NWT but a woman from Fort Good Hope is doing everything she can to keep it alive.

Lucy Ann Yakeleya demonstrates how to use porcupine quills to create art. The Fort Good Hope woman was the traditional artist in residence at the Prince of Wales Northern Heritage Centre in Yellowknife last week.

Lucy Ann Yakeleya was the traditional artist in residence last week at the Prince of Wales Northern Heritage Centre in Yellowknife. She is well known for her fine beading and embroidery but it was her sewing work with porcupine quills that captivated visitors at the museum. Yakeleya was set up in front of a teepee inside the centre and held several workshops and demonstrations for the public.

"You don't see this being done so much anymore. I guess it's easier to do beadwork and embroidery work. I would say it's a dying art. There are not very many young people picking it up," Yakeleya said. "It's something that we, as Dene people, did a long time ago - it's like something that belongs to us and I'd like to keep it."

Yakeleya said she has been doing quillwork since 1999.

"I went to a workshop in Fort Simpson and learned from three ladies who were masters at sewing with the porcupine quills," Yakeleya said. "So here I am demonstrating the different techniques and patterns that you can do with the porcupine quills on moosehide. You can also use the quills on birch bark or you can weave it on a loom." Yakeleya said she decorates handbags, purses and moccasins using the quills.

"I like to do things that don't have too much wear because the quills are a little bit delicate so I try to incorporate it into something that is not going to go through too much wear and tear."

She said she occasionally sells her finished products but added that it is not a business for her.

"It's more my enjoyment and the business end of this would probably be as a teacher and instructing other people on how to sew with the porcupine quills."

A common misconception about the artwork is that the quills are used as sewing needles, Yakeleya said.

"You use the thread and needle and you put the quills on and you put a little stitch beside it to hold the quills in place depending on how the pattern goes."

She said she was pleasantly surprised by how many visitors to the museum to see her workshops.

"I had quite a few people here and everybody was interested and had a few questions. They want to know if I've eaten porcupine or how I get the quills off the pelt and how I dye them, a lot of questions like that." There is no shortage of porcupines even further up north, Yakeleya said.