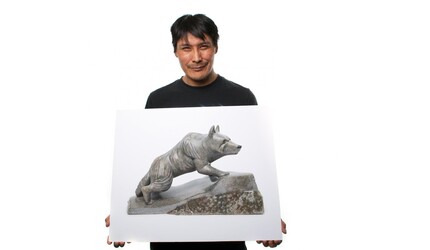 Mainly I carve soapstone or antlers to depict Dene stories that are part of my culture. They need to be heard. I take the legends and put them into carvings so those stories can last for ages. Our Elders are getting older and taking the stories with them so it is my opportunity to get stories from them and put it into art so the next generation will know the legends of our people.

I have some favourite legends or stories to carve. The one I am working on now is about Thunderbird. He reigned over the Rampart River area close to the mountains years ago when all the giants were around. My grandpa told stories about Thunderbird time and time again. When we went to the bush camp by Rampart River it is totally quiet in the area, not even a bird. The legend goes that Thunderbird killed all the animals and then started going after people and villagers, too. So a medicine man tracked Thunderbird and tricked him into diving in the river. It never came out again.

I get antlers from the land around the Fort Good Hope area. If they are fresh, they need to be cured by letting them dry in sun for a good two years. The inside is still too soft and it will start rotting so it’s important to have patience and allow nature take its course. Antlers that have fallen off are already dried and they might be able to be carved that day.

I start by thinking a lot – it takes a lot of thinking, especially about legends. But, I also carve fun little things like one of a little woman with hair down to her feet. She is wearing sunglasses and holding up a fish. Or I have little boys wearing baseball caps and holding bows and arrows.

I am the most proud of one little ordinary 20-pound piece of rock. Everyone was laughing because it was the only piece I had and they all had bigger ones. I carved what I called the Creator’s Eye. It was an eagle swooping down with an angel on its back. It had the neck of a ram on the Eagle’s tail and on one slide of neck, an otter sliding down and on the other a wolf howling. Underneath the jaw a sprit tries to crawl out of neck and then there’s a cougar and in front of its arms there is a snake coiled around eggs on cougar’s shoulder and a hazel and white eye. The piece was small but in the end it was the biggest piece and everyone wanted it. It sold long ago.